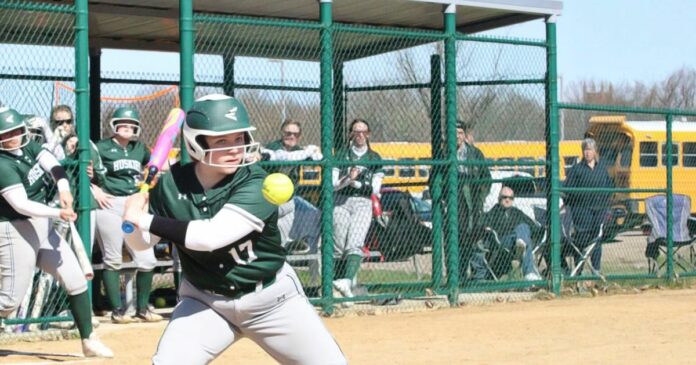 In a wild 20-16 softball victory against Edwards-Knox in the final Saturday, Mallory Peters and Montanna Evans each had five RBIs as Watertown pushed across 10 runs in the third inning to win the Cyclone Booster Club tournament.

In the Cyclones Booster Club tournament semifinals, the Cougars utilized a six-run seventh inning to pull away from the Panthers.

For Belleville Henderson, Ever Vaughn had two singles and Avery Pritchard drove in a run.

The Panthers beat the Green Demons in the consolation game in the Cyclones Booster Club tournament in Watertown, with three runs apiece from Kaydence Allen and Ever Vaughn.

Colleen Davis, the winning pitcher, struck out 14 batters in six innings to lead the Spartans to a “B” Division victory at Lowville.

The Vikings beat the Red Devils (2-2) in nonleague action in Clayton, with Katelyn Solar and Kali Finley both having two hits and two RBIs.

In a nonleague doubleheader in Morristown, the Green Rockets and Patriots swapped walk-off victories.

CANTON wins by a score of 7 to 0 against OFA.

At a Northern Athletic Conference Central Division game in Canton, Sydnee Francis had two hits and three steals to lead Canton to a win against Ogdensburg Free Academy.

In the second inning, St. Lawrence (5-1) scored four runs, followed by three more in the fifth.

In a NAC East Division game in Norwood, Madison Weaver struck out eight batters to lead the Flyers (4-2, 3-1) beat the Colts (1-4).

The Beavers beat the Patriots in a division crossover game in Sackets Harbor, with Jonah Shearer hitting two doubles and driving in seven runs.

In a game reduced to five innings, Beaver River’s Brayden Campeau pitched a two-hitter, striking out 11 batters. Campeau also went 3-for-4 at the bat against Sackets Harbor, including a triple, and drove in three runs (4-4).

Tom Storms went 4-for-5 with four RBIs, three runs scored, and four stolen bases to lead the Comets to a division crossover win against the Lions in Dexter.

Carthage (6-4, 4-3) was paced by Dawson Widrick, who went 3-for-5 with three RBIs and Mason Moser, who doubled and singled twice.

In a NAC East Division triumph against the Larries (2-3) in Madrid, Jack Bailey had three hits for the Yellowjackets.

For Madrid-Waddington, Jacob Morgan pitched a one-hit shutout, struck out eight batters, and had two hits (3-1). Tanor Harvey, Matt Robinson, and Caleb Averill each had two hits to their credit.

TRACK AND FIELD FOR GIRLS

BERNARD AND BANAZEK ARE THE WINNERS.

The Chittenango Invitational was won by Lexi Bernard of South Lewis and Kate Banazek of South Jefferson.

TRACK AND FIELD FOR BOYS

Colton Kempney of Beaver River and Collin Stafford of South Lewis both won first place in the Chittenango Invitational.

With a time of 4:18.76, Kempney won the mile and established a school record, while Stafford won the 3,000 meter steeplechase with a time of 9:51.39, about a minute faster than second place.