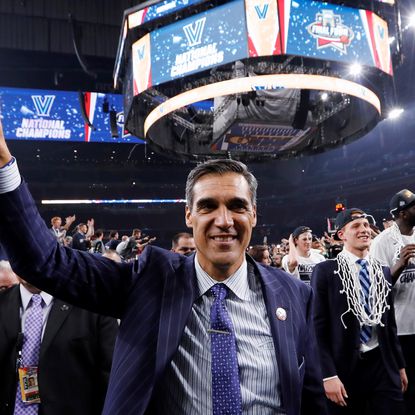 On Wednesday night, Jay Wright shocked college basketball by resigning from Villanova, the Big East team he led to two national championships and four Final Fours during his Hall of Fame career.

“It’s time to enter a new era for Villanova basketball,” Wright said. After 35 years of coaching, I am proud and excited to hand over the reins to Villanova’s next coach. I am eager to remain a part of Villanova and look forward to working with the rest of the leadership team.”

After meeting with many exceptional candidates, we found all these attributes in Kyle Neptune,” said Villanova athletic director Mark Jackson. “He is a person who can navigate the changing landscape of collegiate athletics,” Jackson said.

Kyle quickly stood out with his basketball knowledge, recruiting savvy, and natural ability to connect with student-athletes and coaches.”

There was no immediate indication that Wright was leaving for the NBA or that his decision was health-related. In 2021, he was inducted into the Naismith Basketball Hall of Fame.

Wright will remain at Villanova and stay involved in fundraising, advising, education, etc.

As the third coach with multiple championships to step down in the last two years, he joins Roy Williams of North Carolina and Mike Krzyzewski of Duke.

Villanova was known for defeating Georgetown in the 1985 national championship game and making an occasional trip to the NCAA Tournament before he arrived.

After laying a foundation for three years, Wright led Villanova to the Sweet 16 in 2005. The Wildcats then made the Elite Eight in 2007 and reached the Final Four in 2009.

Under Wright, Villanova won its first national championship in 2016 with a buzzer-beater by Kris Jenkins and decimated the NCAA Tournament field in 2018 by winning every game by double digits.

Neptune spent three seasons as an assistant at Niagara before returning to the Wildcats in 2013. He went 16-16 during his one season at Fordham.

Since the conference was reorganized in 2013, the Wildcats have won nine times a regular-season or postseason conference championships.

— Wright’s Wildcats earned a No. 1 or No. 2 seed in the NCAA Tournament for the eighth consecutive season.

“Simply a remarkable career,” said former Villanova AD Vince Nicastro, who hired Wright. “Will be regarded as one of the best coaches in college basketball history – and an even better person. Has won with integrity, class, and grace. And has served as a great role model for his players and colleagues.”

Wright lost 81-65 to Kansas in the Final Four. The Wildcats finished 30-8 this season.

Wright, a native of Churchville, Pennsylvania, played college basketball at Bucknell and became an assistant at Rochester and Drexel before spending five seasons as Rollie Massimino’s assistant at Villanova. He followed Massimino to UNLV for two more years before taking over as head coach at Hofstra in 1994.

He rejected numerous NBA and other college offers throughout his career and remained committed to the Wildcats.

Wright had stints as a coach in the Pan American Games and World University Games, and he served as an assistant coach for Team USA under Gregg Popovich.

He was scheduled to speak at a press conference on Friday.